Lamarty in TV project "Kvartirny vopros" on NTV. Kitchen under the wing of an angel.

According to the design project, it was possible to optimize the space of the kitchen and the adjacent loggia. Furniture made of laminated chipboard in a delicate powdery shade of TEFFI decor added a suitable stylistic design to the interior.

Project designer Alena Vlasova filled the kitchen with elements of the sea coast. With the help of elastic plaster, a light sandy texture was added to the walls. After that, the walls and ceiling were painted in a single peach shade. With him, the kitchen will be warm and sunny even in a gloomy autumn. At the same time, in addition to pastel shades, the painting on the wall in the form of a leaf of an exotic plant, resembling an angel's wing, will remind you of the south. The floor became a reference to the rocky seashore. The floor covering was porcelain stoneware imitating natural stone, the original geometric laying of which gave the room dynamics.

The cabinets of the kitchen set from Syktyvkar laminated chipboard Lamarty were built in two tiers along one wall in a line. The refined and warm tone of the dusty TEFFI decor returns to the sandy motif of the concept of the sea coast. Open shelves with impressive wall thickness became the highlight of the furniture composition and diluted the solid canvas of the headset. The furniture complex stretched up to the ceiling, thanks to which there were more storage spaces. The upper and lower modules of the kitchen set are separated by splashing waves on the apron. The kitchen set continued on the balcony: a high cabinet-pencil case contained a two-chamber refrigerator in its depths, and open shelves with thickened edges added storage space on the loggia. The rich inner world of the suite with capacious storage systems is covered by MDF facades with integrated handles, in the enamel color of the walls.

The center of the dining group was a round table, which became a kind of reference to the resort cafe. A comfortable bench, accompanied by a couple of chairs, helped to optimize the space around the table. This decision allowed us to save space, and the dining group does not eat up "air" in the kitchen.

Since the kitchen did not have enough space, the loggia became a full-fledged continuation of the kitchen. A sliding partition with large glass leads to the balcony, which let in natural light into the room, while making the space light. The portal to the loggia, emphasizing the zoning of the space, has acquired a rich blue hue. The loggia has become not just a continuation of the kitchen, but has also gained its functionality. In the far part of the loggia, a mini-dressing room was equipped. Along the perimeter of the window, a bar was placed, which turned into a long part of the window sill, behind which you can drink tea on the balcony and enjoy the views. In turn, the rest of the space under the window sill was taken over by a spacious storage system, which is identical in style to the kitchen set. The internal filling, made of laminated chipboard in TEFFI decor, echoes the natural pastel shades. The bar counter was complemented by compact bar stools. They can be pushed under the countertop at any time so as not to interfere with the passage, which is very important for a small space.

Description and video of the broadcast can be found on the official website of the TV show "Kvartirny vopros". Aired on 10/29/2022.
Project author: Alena Vlasova 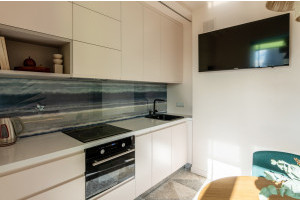 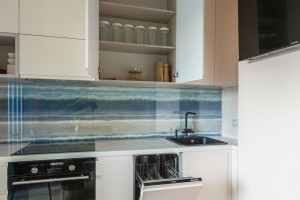 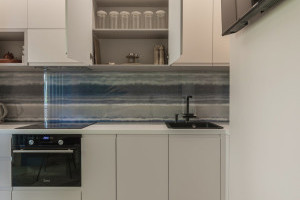 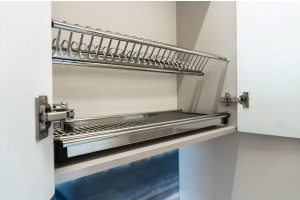 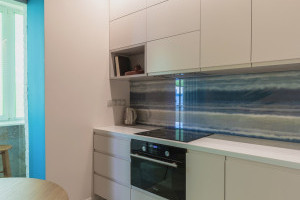 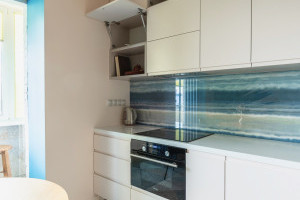 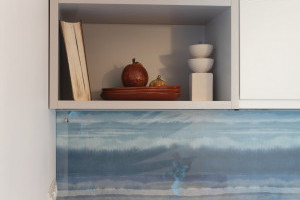 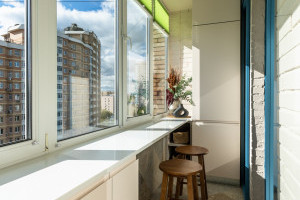 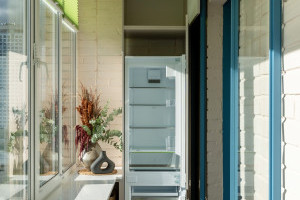 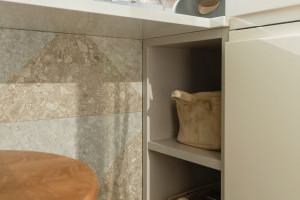 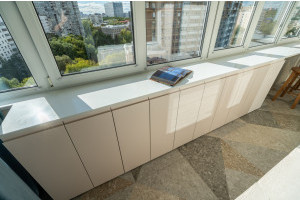 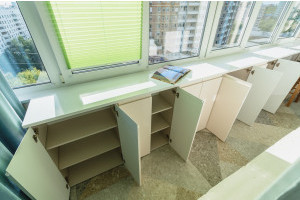 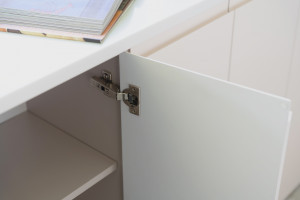 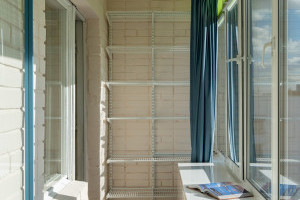 
all news
Show all Hide